Creating the Navitimer, the Co-Pilot and the SuperOcean – the legacy of Breitling’s modern icons 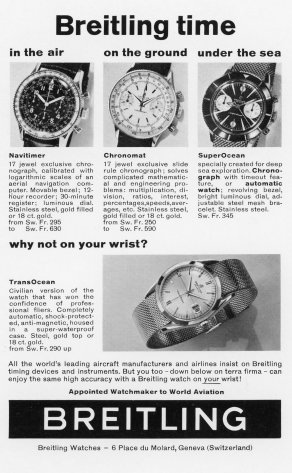 Whereas the 1940s were characterized by military expansion, the 1950s represented a Golden Age of consumer expansion. Civil aviation took off at a meteoric pace as airliners supplanted ocean liners as the most efficient (and glamorous) means of travel. The great American aircraft manufacturers – Lockheed, Convair, Douglas and Boeing – were locked in a heady competition to develop increasingly high-performance, reliable and comfortable long-range aircraft. At the same time, leisure motoring and nautical pursuits also burst onto the scene, fuelled by the freewheeling post-war lifestyle.

As a wise businessman, Willy Breitling didn’t miss the opportunities presented by these social and economic changes. In fact, they were the impetus for some of Breitling’s best-known watches designed for air, land and sea.

Willy Breitling set out to develop a wrist-worn chronograph that would allow pilots to perform all necessary flight calculations, including average speed, distance traveled, fuel consumption and rate of climb. His idea was to adapt the Chronomat’s logarithmic slide rule for aviation purposes and integrate it into a rotating bezel, capped with small beads to make it easy to manipulate even with a pilot’s gloved hands.

Two years later, the Aircraft Owners and Pilots Association (AOPA), the largest pilots’ club in the world, announced the design as its official timepiece. The Navitimer — its name a combination of “navigation” and “timer” – was born. Breitling’s unprecedented “flight computer” was quickly adopted by pilots worldwide.

The Navitimer was initially commissioned by the AOPA and not available to the public. Only after witnessing its huge success among AOPA members did Willy Breitling decide to make it part of Breitling’s catalogue. From there, the watch that was already a mainstay in every cockpit went on to become one of the most iconic timepieces ever made. 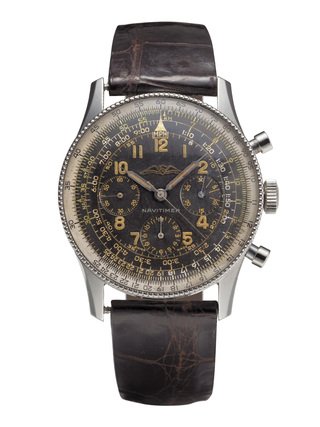 The very first Navitimer, designed for the AOPA, didn’t feature the Breitling brand name or logo on the dial. Its 806 reference was not yet stamped on the caseback and the watch was only distributed to AOPA members. However, around 1956, the Navitimer was made available to the public. This version received its now-iconic 806 reference and featured the Breitling name above a stylized AOPA winged logo, with the association’s acronym removed.

While the Navitimer would be the darling of the airline industry, Willy Breitling wanted to develop yet another pilots’ chronograph, this time for military and recreational pilots who needed a robust chronograph that was easily readable, even from the bumpy cockpit of a small plane. Enter the Co-Pilot, a chronograph designed to be a trustworthy companion to aviators of all stripes. It perfectly embodied the rugged, reliable and efficient principles that were the hallmark of the HUIT Aviation department.

The first Co-Pilot (Ref. 765 AVI) launched in 1953 was the descendant of the onboard and wrist-worn military instruments made by the HUIT Aviation department. The oversized numerals on its black dial ensured easy legibility, so as not to distract the pilot from flying. Its engraved rotating bezel gave its wearers an immediate reading of elapsed time and could be used as a second time-zone indicator. 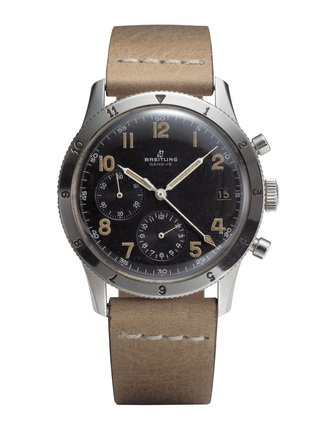 To mark his 25th year at the company’s helm, Willy Breitling, having already conquered the sky, set his sights on a new challenge: the ocean. It was a time when Jacques Cousteau and his undersea documentaries were sparking a trend in scuba diving and aquatic sports. Professionals and amateurs alike needed instruments that could be safely worn underwater to provide vital information. In response, Breitling launched the SuperOcean, a diving watch that was watertight to a depth of 200 meters (660 ft) – a major technical feat at the time. Every detail of the design and construction was conceived to provide optimal functionality, readability and safety. 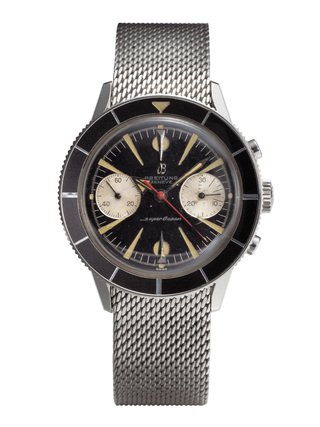 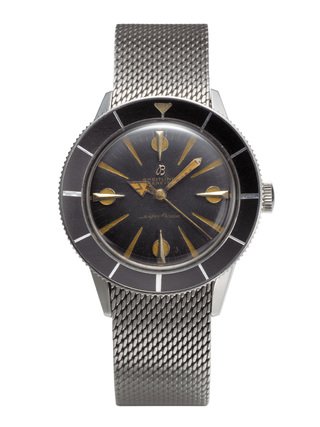 These two SuperOcean watches represented two sides of 1950s nautical sporting life: the elegant time-only (Ref. 1004) was intended for the gentleman who cared about his style, even while at the beach. While the sportier chronograph (Ref. 807) was made for the seasoned diver who more interested in straightforward performance and legibility.

As space exploration was heating up in the early 1960s, Breitling would also have its lift-off. The Americans had started the Mercury Program to practice and perfect its manned space flights as it worked towards a moon landing. Lt. Commander Scott Carpenter was one of the 7 astronauts set to take part in the historical series of missions. Already a fan of the Navitimer from his training days, Carpenter came to Breitling with a special request: Create an astronaut’s version of the iconic pilot’s watch with an enlarged rotating bezel for use with spacesuit gloves, and a 24-hour dial to tell day from night in the darkness of space.

On May 24, 1962, Scott Carpenter orbited the earth three times with the custom Navitimer on his wrist. Mission accomplished! This was a major achievement for Breitling and marked the beginning of the  “Cosmonaute,” the first Swiss wrist-worn chronograph to have travelled to space. Like the Navitimer before it, the Cosmonaute developed its own cult following and was later made publicly available.

Willy Breitling launched the Top Time collection with a clear mission: to suit the needs of “young and active professionals.” Thanks to its elegant yet unconventional designs, that included square cases and graphic dials, the Top Time quickly became the watch of choice for a fashionable in-crowd of men and women equally drawn to the watch’s bold proportions.

During the second half of the 1960s, Breitling experienced an unprecedented demand for its Top Time chronographs. They appeared on the pages of fashion magazines, and the film industry soon followed suit, with the Breitling watches stealing the show on the silver screen, too.

Following the success of the Navitimer, Willy Breitling began work on a sporty contemporary chronograph that would break from traditional design codes to fit perfectly with the vibe of the 1960s.

The name of this new collection – Top Time – was deliberately kept short, punchy and in English to convey its modern design and energy.Breitling’s “unconventional chronograph” shot to the pages of Time, Life and Harper’s Bazaar, becoming a fashion must-have.

As Breitling reached the end of the decade, it undertook one of the most important watchmaking challenges of the 20th century: Building an automatic chronograph.

Developed in cooperation with Dubois Dépraz, Heuer-Leonidas and Hamilton Büren, the Caliber Chrono-Matic was a huge undertaking and of such significance to watchmaking, its 1969 unveiling took place before the world press. Based on this ground-breaking movement, Breitling produced an entire line of self-winding chronographs. The fact that the crown was on the left-hand side of the case and pushers were on the right shows just how different the Breitling Chrono-Matic would have appeared at the time.

The 1950s was a decade marked by an economic boom, in which everything from new cars to suburban homes to consumer goods became more accessible than ever before. As products and brands flooded the market, companies like Breitling had to stay one step ahead of the competition, if not two. Luckily, being forward-thinking was part of the Breitling DNA. With the Navitimer, SuperOcean and Top Time collections, Breitling was able to conquer the air, sea, land—and space! Even so, a threat was looming on the horizon in the form of quartz technology. To stay on top of this next challenge would require Breitling to push the boundaries of design and technology like never before.